Capitalizing on a host of recent innovations, Aptera is changing the face of both the electrical vehicle (EV) market and personal transportation in general. In December 2020, they brought to market the first solar electric automobile that boasts over 1,000 miles (1,600 km) of autonomous range. With pre-orders reaching over $100 million US and selling out within 24 hours, the Aptera heralds a major shift in the automotive industry.

These features, along with numerous other technical breakthroughs, make the Aptera less expensive to build, less expensive to own, and more energy efficient than other EVs. Plus, they are just as fast and just as safe as any conventional vehicle on the road.

Racing towards a sustainable transportation future

Aptera’s founders, Chris Anthony and Steve Fambro, pursued an aggressive schedule to bring their first vehicle to market in less than one year.

To help them meet their tight schedule, Anthony and Fambro hired Brian Gallagher and his company, Andromeda Interfaces, to assist with the development of Aptera's central infotainment display (CID). The CID is the nerve center of Aptera’s user interface and user experience (UI/UX). Not long after work had begun, Andromeda also got heavily involved in the electrical system integration and vehicle networking side of the project.

“HMI (human/machine interface) development for a vehicle is very challenging,” says Gallagher. “It's a new arena that OEMs are not very familiar with yet, and a lot of them fail in that aspect.”

What makes the Aptera an especially difficult challenge is that it’s a whole new take on electric vehicles. “Aptera is looking toward a future of maximum efficiency, extended EV range, and sustainable travel," says Sarah Hardwick, Chief Marketing Officer at Aptera. “Other EV’s currently on the market have a very limited range between charges.”

Gallagher says the UI/UX of the vehicle needed to convey that concept to drivers and help them achieve Aptera’s goals for the vehicle. "It's very obvious that Tesla’s focus is on autonomous vehicles,” he says. “In our case, Aptera's DNA is really about efficiency and providing a surplus of range. We needed to ensure that was implemented into the UI itself.”

Searching for an embedded GUI design and development partner

Andromeda had previously been involved in developing a CID for another EV, the Genovation GXE, which currently holds the land speed record for an electric vehicle. That project had presented challenges similar to those they now faced. With Genovation, they had a hardware solution in place but needed to develop the application software within a very tight timeframe, and they needed it to compete favorably with the feature-rich UI/UX EV buyers had come to expect.

Andromeda’s search for a partner on that project had led them to Crank Software and Storyboard.

Storyboard is Crank’s cross-platform GUI development framework for embedded touchscreens. From his work for Genovation, Gallagher knew what Crank’s framework offered. “Storyboard is very powerful and intuitive in the way it bridges the gap between what the UI/UX designer can envision, and what the software designer needs to do to implement that vision on the actual hardware target,” he says.

Gallagher downloaded a free evaluation version of Storyboard. He then used that demo version and his personal experience to sell Aptera's management on the software.

When it comes to GUI development, Gallagher says, there are lots of alternatives. “We even got involved with another company that did some aftermarket UI graphics,” he says. “But we soon came to realize their stuff was not really ready for prime time—not something you could take to market. We wanted to ensure that whatever we invested in now would carry into production later.”

Gallagher says they ultimately chose Storyboard because, “We knew Crank's software was designed and set up for production and scaling.”

Normally, once the Storyboard evaluation period ends, a customer moves forward by purchasing a development seat on the platform. But due to their time and budget constraints, Aptera took a different approach.

Because Andromeda was so heavily involved in other aspects of the project’s electrical system integration, Gallagher knew they would need help with the UI development if they were to meet their planned schedule. Consequently, Aptera chose to also contract GUI design and development services from Crank.

Once Aptera had a contract in place with Crank, they began two parallel development efforts.

Aptera had defined a timeline of six to eight weeks for GUI design. They delivered their GUI design requirements to Crank's graphic design partner to begin that effort. As designs began coming in, Aptera provided feedback to the design team.

In parallel with that, Aptera selected the design assets they wanted to focus on and passed them to Crank's application software team for preliminary development in Storyboard. In turn, Crank’s application development team provided simulations for Gallagher and his team to interact with on their desktops and demonstrate to Aptera’s stakeholders. They also provided preliminary application software demos for Gallagher’s team to try out on their hardware platform.

“We were providing a lot of that feedback during that time,” Gallagher says. “And in less than two months, we accomplished all we needed for our prototype.”

For their hardware platform, Aptera chose a Toradex i.MX8 quad-core processor computer-on-module with a Linux kernel. That drove a 15.6-inch LG display with a multi-capacitive touchscreen surface. With the application running on that platform, they were able to integrate with the vehicle’s functionality and test iterations, providing feedback to Crank to resolve any issues.

Read specifics about the Aptera GUI development in this blog.

Gallagher was extremely pleased with the results, saying that they hit all their schedule, budget, and feature targets for the UI/UX design portion of the project.

“I definitely would say they exceeded our expectations,” says Gallagher, referring to Crank’s design and development teams. “They were nailing it every time with the GUI. In parallel, they were already implementing those assets as the GUI designs iteration—which kind of caught me off guard. They were a lot further ahead in the process than we were.”

Keeping important stakeholders in the loop

Gallagher loves how Crank made it easy to communicate design concepts to other stakeholders. Busy executives rarely have immediate access to Storyboard or the hardware platform, and finding time for a trip to the lab can be difficult. Gallagher mentioned two things about Storyboard that surprised him in this regard:

“The first thing is they offer some truly awesome demos,” says Gallagher. "Like their ‘Star Wars’ demo. I love demonstrating that to people!"

“And then the second thing—what really surprised me—was that you can take your UI and output it as an executable file. (Stakeholders) can then open that file and experience the UI in simulation on their own computers. That’s extremely helpful in conveying concepts and progress to management." 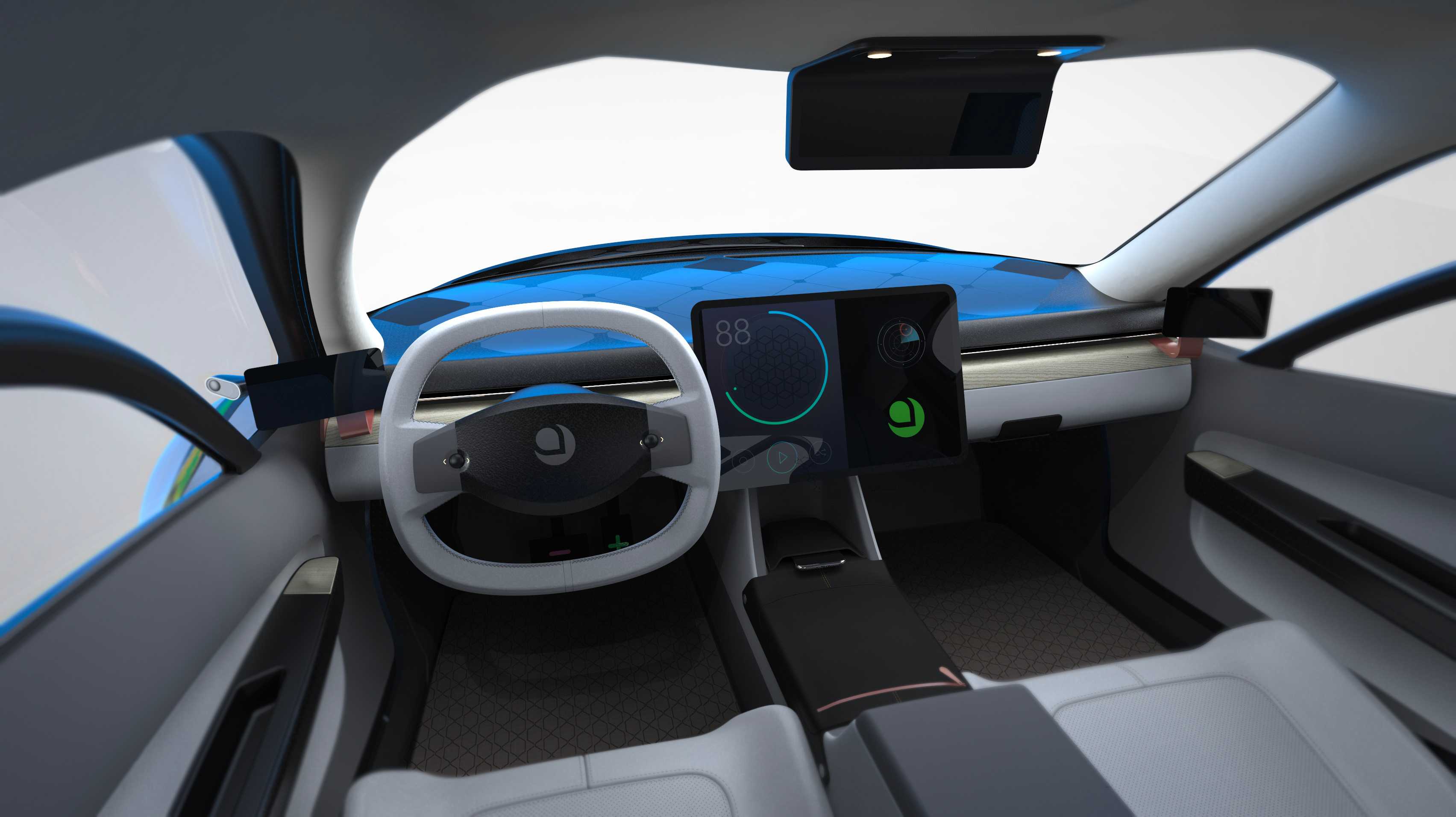 Gallagher also had praise for the support Aptera received from Crank's engineering staff.

“Crank has an amazing support mechanism in place,” he says. “They want their customers to succeed, and they're willing to assign resources to work with you throughout the process. I know with other commercial HMI software tools you may not get that type of support.”

As an example, he cited the help he and his team received from Crank Software Field Applications Engineer Nik Schultz. “When we were trying to get the hardware platform up and running, Nik really went out of his way to provide us with clear, comprehensive instructions and walk us through them,” Gallagher says. “That really shined and exceeded our expectations.”

He was also impressed that Crank's VP of R&D, Thomas Fletcher, got involved when some other technical issues came up. “That's what truly convinced me of Crank," said Gallagher. "Thomas would really go out of his way. We look forward to having further support like that from Crank.”

Read more about the Aptera GUI development in this blog.