Over the years, technological innovation has allowed the medical equipment sector to become a mission-critical part of the healthcare industry, delivering such benefits as lower operating costs and improved patient outcomes. Today, the demand for equipment with intuitive graphical user interfaces (GUIs) is creating additional opportunities for manufacturers, along with challenges around nimble product development and rapid time-to-market delivery. As a result, embedded GUI software engineers are playing an increasingly important role and have the potential to help save time, reduce costs, and improve patient care at the early stages of the product-development process.

Our client is a Fortune 500 medical technology company based in the United States, with offices around the world. Their products include surgical and patient-handling equipment, endoscopic solutions, neurovascular and spinal devices – the list is long and the successes are many.

While a number of the products include graphical user interfaces, the company often looks to outside GUI consultants for this expertise. This approach gets the job done, however, bringing consultants up to speed on different projects takes up valuable time. Certain divisions do have dedicated GUI professionals, but their conventional approach involves mocking up static screens using a design tool and then creating an actual interface using a programming language. This too is a drain on limited resources and budgets. 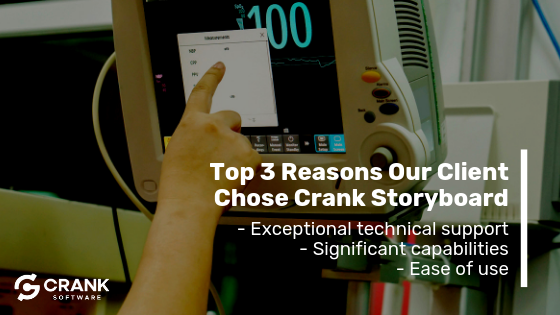 The global medical technology company needed to upgrade an interface on an existing surgical lighting product. The previous interface was over five years old and very clunky. Users didn’t find it intuitive to use and programmers found it labour-intensive to make changes – moving a button or adding an icon could easily take 30+ minutes. Additionally, tech support for the GUI framework was non-existent – a challenge since there was only one in-house software engineer assigned to the project.

“Crank Storyboard worked as it should, with significant capabilities, ease of use, and exceptional technical support.”

The engineer knew of another division within the company that had a software team working on user interface design and development, so he reached out to them to see what they were using. It turned out the group had just done a thorough investigation into a number of competitive products. Their number one choice was Crank Storyboard, concluding that it “worked as it should” with significant capabilities, ease of use, and exceptional technical support.

Around this same time, another one of their products was running into GUI issues; a number of workflow and usability flaws were uncovered during user testing. The engineer was pulled in to help out. He was given one month to replace the GUI that had taken the group almost a year to develop. He decided to give Crank Storyboard a try. 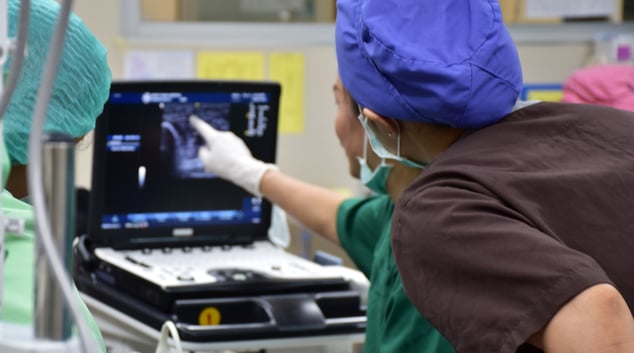 The software engineer called Crank Software for a demo and had us walk him through the necessary steps to get his project up and running. Within two weeks he had designed all the UI screens and graphics, and within a month had developed a fully functional GUI prototype. “Storyboard provided an extremely rapid way to develop code,” said the engineer. “Because it could create executables for Windows as well as for our target hardware, I was able to do the majority of the development on my laptop without having to mess with Ethernet cables, SD cards, and prototyping boards.”

“Storyboard provided an extremely rapid way to develop code. Because it could create executable for Windows and our target hardware, I was able to do the majority of the development on my laptop.”

The newly revised product was soon back in usability testing with nurses, technicians, and other medical personnel. While it was a major improvement from the previous version, user feedback indicated areas where the design could still be improved further. What was surprising to the team was that they were able to turn around a new version of the GUI same day using Storyboard and its services. “Because it’s so easy to get prototypes up and running in Storyboard, you can show your GUI to numerous stakeholders early in the process to get buy-in and still have lots of time to revise the entire design,” explained the software engineer. “This includes the ability to test hardware early in the development cycle before you get locked into component selection.” He also found that quick iterations made it much easier to find and fix bugs. He added: “The end result is a much better GUI and a superior product.”

The software engineer also appreciated the support he received whenever he encountered a problem. “With previous vendors, we could easily wait a month before getting help and that would put everything on hold,” he said. “With Crank, we got an immediate response and a custom solution to more complicated challenges within a week.”

The engineer was familiar with other graphical libraries and frameworks, and was impressed with Storyboard’s intuitive design and ease of development. He estimates that it took roughly one tenth of the time to build a Storyboard GUI than it would have taken using the company’s existing tools. Given the average annual salary for a software engineer in the US, our medical technology client saved over $80K in development costs on this one project alone.

Our client is ready to use Storyboard on another project and can see them using it for the foreseeable future. “Labor is very expensive, a big advantage with Crank is that we can do design and development at once, which preserves a tremendous amount of effort and gets us to market significantly quicker.”